The Upper Keys LWV is proud of its past successes!

We celebrated Constitution Day on September 16, 2019 at the Murray Nelson Government Center, announcing the winners of our Constitution Essay Contest and featuring a speaker on Election Security.   We plan on making Constitution Day an annual event.  Next year we’ll focus on the 19th Amendment giving women the right to vote, which celebrates its 100th anniversary in 2020! 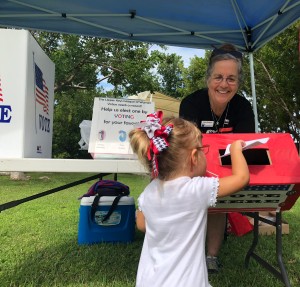 Party at the Polls

To encourage early voting and celebrate our right to vote, we threw a Party at the Polls in November 2018 at the Murray Nelson Government Center, the location for early voting in the Upper Keys.  We even had a junior election for our UKLWV mascot, who will be featured in our 2020 election materials!

In 2018, we participated in our community Fourth of July Parade and Picnic, walking the parade route reminding people to register to vote and hosting a registration booth at the picnic.  Brand new citizen Carolina Hernandez (featured on our home page) registered to vote that day!

We also made a community presentation about the numerous amendments presented to Florida voters in our November election.

In 2017, we sponsored a solar energy co-op. Over 100 homeowners in the Upper Keys signed up.  Cutler Bay Solar Solutions was selected as our provider.  Nearly 30 of the people who signed up added solar to their homes!